Jennifer Aniston always proved that age is just a number for her. Aniston has always maintained the crown when it came to fashion. From her iconic Rachel Green look in FRIENDS to each one of her red-carpet extravaganzas look, she showed that she is in fact a style icon. Aniston has time and again charmed her fans with different styles and also worked at fashion companies in the show. From attending the FRIENDS Reunion in May with her favorite pals to going in an all-white dress at the SAG Awards, Aniston knows exactly how to style herself for different occasions!

Not just her style, the actress is iconic in so many ways. She has inspired so many people to live healthy lives. Aniston can go from not-so-beautiful pink grown to flaunt a dungaree and own every look in a jiffy just like her character Rachel Green. With this, we look back at some of Aniston’s most iconic styles at award ceremonies that almost stopped the event because of her beauty.

The Directors Guild of America issues the Directors Guild Awards. Jennifer Aniston was nominated for this award in the year 2012 for an American drama-comedy television film “Five”. She was nominated in the category “Outstanding Directorial Achievement in Movies for Television/Miniseries”. Even though she didn’t win the award, she was looking ravishing in her black off-shoulder dress.

The Hollywood Foreign Press Association (HFPA) issues the Golden Globe awards. Aniston was nominated for this award several times for her different works such as “FRIENDS”, “Cake”, and “The Morning Show”. In 2003, she won this award under the category “Best Actress – Television Series Musical or Comedy” for FRIENDS. Also, she turned the heads around in her black floor-length dress.

The Independent Spirit Awards are dedicated to independent filmmakers. Aniston was nominated for this award in 2003 under the category “Best Female Lead” for her amazing work in the movie “The Good Girl”. She didn’t win the award, but she surely win her fans with her killer looks in black top and black bottom.

The Academy of Television Arts & Sciences (ATAS) issues the Primetime Emmy Awards. Throughout her acting career, she was nominated 8 times for the prestigious Emmy awards. Out of them, she won 1 Emmy award in the year 2002 for her role in FRIENDS under the category “Outstanding Lead Actress in a Comedy Series”. She was looking breathtaking in her off-white floor-length dress with messy hair.

The Screen Actors Guild-American Federation of Television and Radio Arts (SAG-AFTRA) issues the Screen Actors Guild awards. Aniston was nominated 11 times for this award and won twice for her work in “FRIENDS” and “The Morning Show” under the category “Outstanding Performance by an Ensemble in a Comedy Series” and “Outstanding Performance by a Female Actor in a Drama Series” respectively. Aniston proves that she is truly a style icon in this flawless white dress.

The Guys Choice Awards is an award show that is produced by the Viacom cable channel, Spike. The winners of this award are chosen based on voting by fans and viewers. Aniston was nominated for this award in the year 2011 under the category “Decade Of Hotness”. She was not just nominated but won too. She attended the award ceremony in a black off-shoulder short dress. Undoubtedly, she was looking the best in the event.

The MTV Movie & TV Awards is a film and television awards show presented annually on MTV. Aniston was nominated for 7 awards and won 2 out of them under the category “Best On-Screen Dirt Bag” for “Horrible Bosses” and “Best Kiss” for “We’re The Millers”. Aniston was definitely killing with her looks in her classic black dress.

The People’s Choice Awards is an American awards show. In this, the stars are voted online by the general public and fans. Aniston has been nominated for this award a total of 17 times. Out of which, she won 6 times for her amazing role in “FRIENDS”, once for “Wanderlust”, and once for “Murder Mystery”. However, she not only won the award but also her fans by looking super adorable in her black floor-length dress. 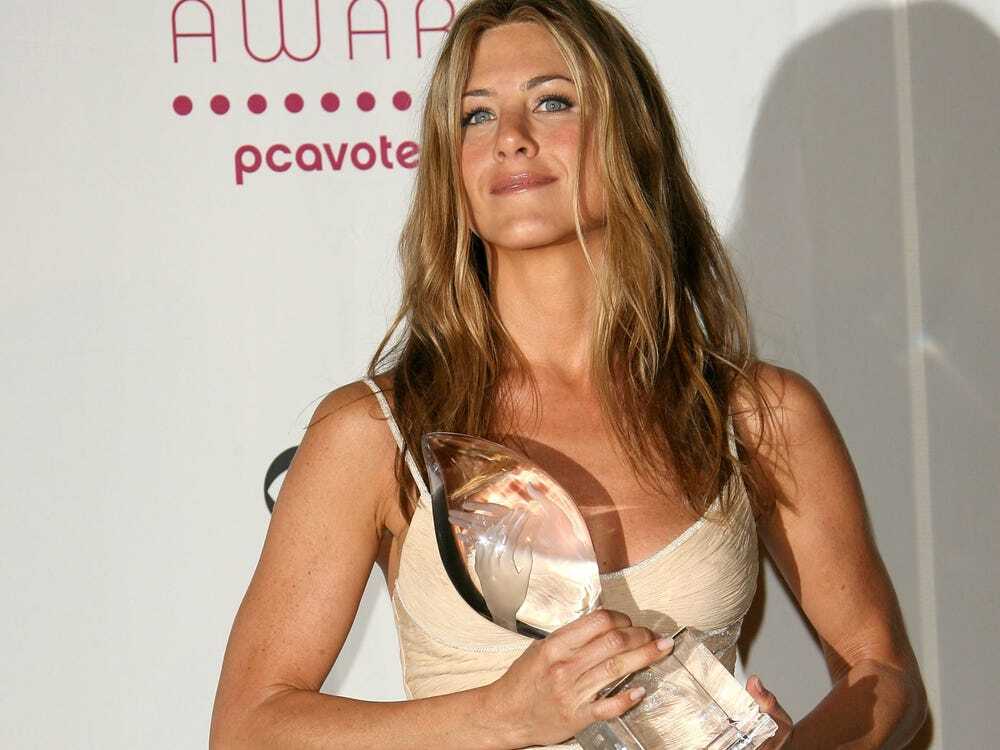 The Teen Choice Awards is an annual awards show. The awards honor the year’s biggest achievements in the entertainment industry that are voted by viewers living in the United States. It airs on the Fox television network. Aniston got 16 nominations for this award and 6 out of them for her work in “FRIENDS”, “The Break-up”, and “Just Go With It”. Apart from winning the award, she the event with the stunning looks in the ceremony in her off-white flowy dress.

The Critics’ Choice Movie Awards is an award show presented annually by the American-Canadian Critics Choice Association (CCA). Aniston was nominated for this award for her work in the American drama movie “Cake” under the category of “Best Actress”. Even though she didn’t win the award, she definitely won the people with her flawless looks in her sea-blue dress.

The GLAAD Media Award is an accolade bestowed by GLAAD. It honors various branches of the media for their outstanding representations of the LGBT community and the issues that affect their lives. Aniston was nominated for this award in 2007 under the category “Vanguard Award”. She won the award and the hearts of people as well. She surely turned heads in her black sleek dress.

The Hollywood Film Awards are an American motion picture award ceremony. It was founded by Carlos de Abreu. Aniston was nominated for this award in the year 2002 for her amazing work in the movie “The Good Girl” under the category “Actress Of The Year”. She not only won the award but also the event with her killer looks. She wore a beautiful peach color dress and she looked beautiful in it.

SAG-AFTRA Foundation is an American organization that provides educational programming to the professionals of SAG-AFTRA. Aniston was nominated for this prestigious award in the year 2019 under the category “Artists Inspiration Award”. Apart from winning the award, in her classic black and white flowy dress, she stopped the event with her looks as well.

CineVegas International Film Festival Awards was a film festival held annually at the Palms Casino Resort in Paradise, Nevada. However, now it has been resumed as part of the Las Vegas Film Festival. Aniston was nominated for this award in the year 2007 for a short film “Room 10” under the category “Best Short Film”. In the event, she wore a black off-shoulder dress. Undoubtedly, she won the award while looking stunning in the event.

Santa Barbara International Film Festival Awards is an eleven-day film festival held in Santa Barbara, California since 1986. Aniston was nominated for this amazing award in the year 2015 for her outstanding work in the movie “Cake” under the category “Montecito Award”. She wore the classic black turtle neck dress at the award ceremony and undoubtedly, she looked flawless in that dress. Also, she won the award.