F.R.I.E.N.D.S. and The Big Bang Theory, are the two most famous American sitcoms. These two shows managed to gather love from the audience for more than 10 years. The two shows aired in totally different eras, yet we may find many similarities in these two. Today we’re going to discuss some similarities we found between these two. So let’s get started.

1) Both Series Begin With The Entrance Of A Beauty:

Remember how FRIENDS began? Of course, everyone remembers how it began. Rachel entered the cafe in her wedding dress while everyone else was already there, the group was already made up and Rachel was added after the show began. Now, recall the first episode of The Big Bang Theory. Penny just moved across the hall, and they welcomed her and invited her to dinner. Later she also becomes an inseparable part of their friend’s group, just like Rachel. 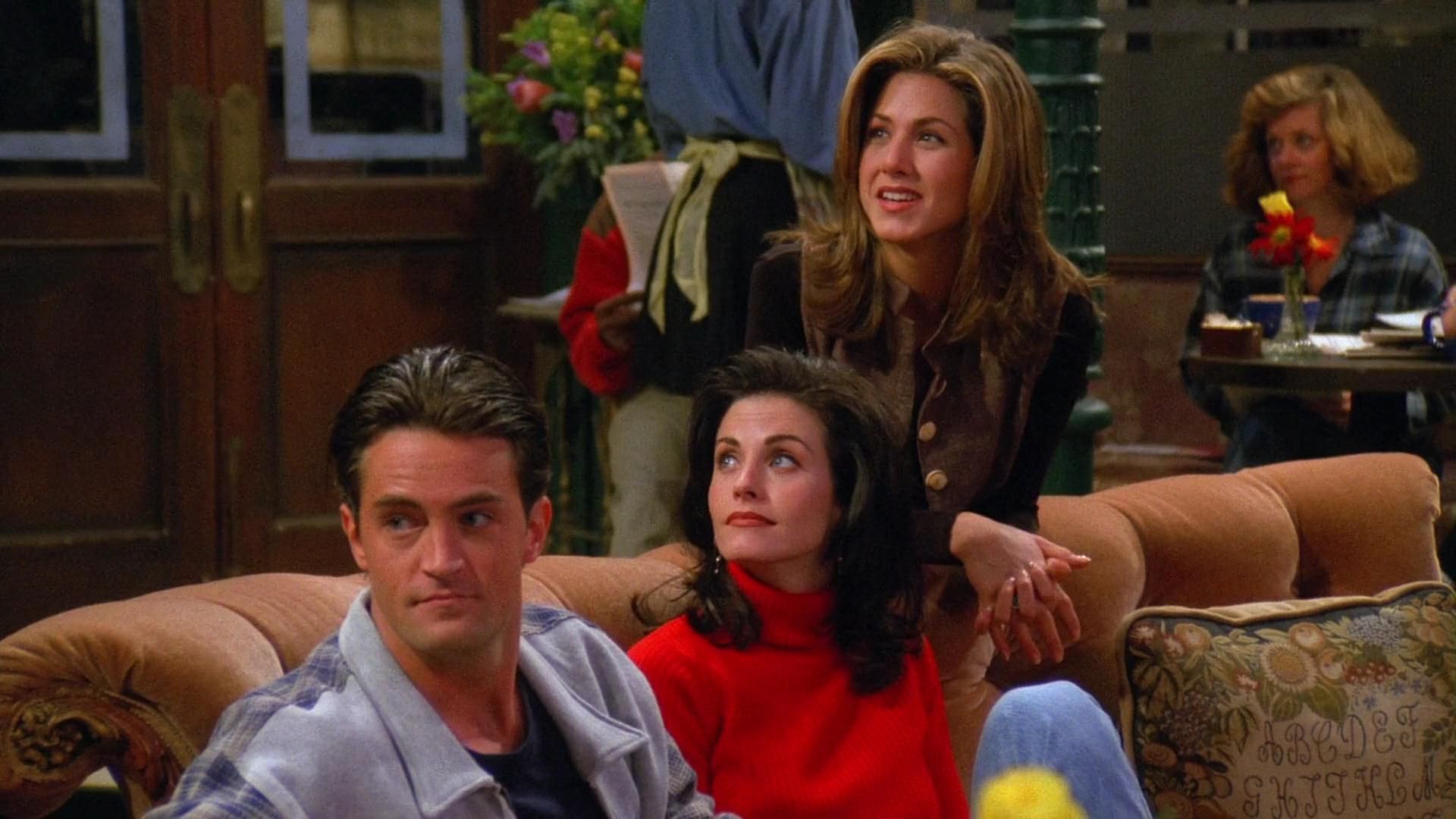 ‘Central Perk’ in FRIENDS and ‘The Comic Book Store’ in The Big Bang Theory, are go-to places in both the series. Normally FRIENDS will begin at the coffee shop, drinking coffees, and discussing literally anything. We can find the same thing happening at ‘The Comic Book Store’ in TBBT. Nerds normally hang out at the store, sometimes accompanied by the girls too, exactly the same way it happens in FRIENDS.

Not only the places but also the owners of these places represent, to some extent, the same traits. Gunther and Stuart both are bachelors, without any friends, owning these two places. Gunther has a hard crush on Rachel where Stuart is in love with Penny, though the intensity of emotions are different both make us laugh. The difference between these two ways is that the coffee shop earned very well, though Stuart’s store doesn’t work well in the beginning, but eventually lightens up after a tweet. Gunther ends up remaining single and Stuart finds someone with the same weird qualities.

Ross and Leonard both play the same kinda characters. Though almost every character in TBBT is a nerd, Leonard and Ross share many of the same characteristics. Such as beginning, and ending their love life with the same woman, having PhDs, ending up with the beautiful one. They both have many allergies and such.

5) The Beauties Beginning Their Career As A Clumsy Waitresses And Finding Their Profession Eventually:

Penny and Rachel, are probably the worst waitresses existing in the world of sitcoms. They both begin their careers as clumsy waitresses. Both of them got this job because of their good looks. They eventually found a proper career niche and ended up earning a lot. Not just this, both of them married the nerds of the show, Leonard and Ross. Rachel had a baby with Ross accidentally, and Penny also ended up being pregnant with Leonard’s baby after their wedding.

6) Bernadette And Monica Being The Strongest Woman Among The Whole Group Of Friends:

Monica and Bernadette were actually the strongest women compared to all the other female characters in both shows. Bernadette faced every obstacle in her path and overcame it all on her own without anybody’s help. Monica, who could not expect any help from her parents, also fought many problems in her life and eventually finds her happy ending. They both were considered to be a little mean, yet strongest among all the characters.

7) Two apartments On The Same Floor: 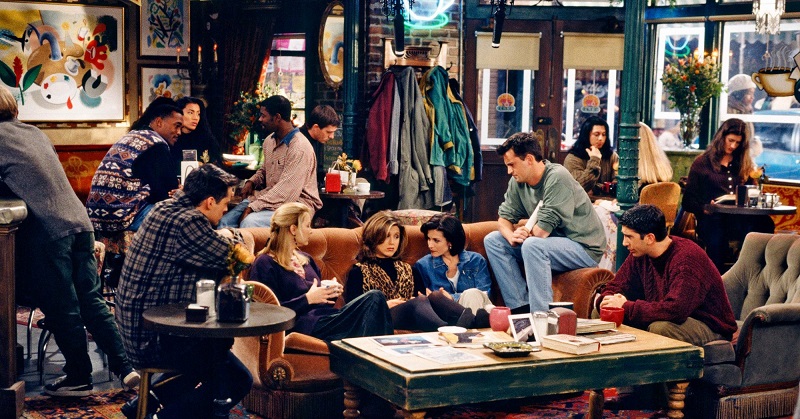 Whether in FRIENDS or in TBBT, we can see the whole group of friends dining together at one place. In FRIENDS, this dining place is Monica’s apartment whereas, in TBBT, it’s Leonard’s apartment.

Okay, just imagine these two having a conversation lol. Phoebe plays the role of that weird friend, which we all have in our group. The same role is played by Sheldon in TBBT. Though Sheldon is differently weird than Phoebe. Sheldon is also a little bit meanwhile Phoebe is a lovely woman. But, no one can deny the fact they’re weird. And probably the most beloved weirdos.

Chandler and Joey’s bromance is world-famous and sets extraordinary friendship goals among the boys. But, Raj and Howard’s bromance is underrated. Though people even assume that Howard and Raj may have ended up as a romantic couple, hey, this is bromance and not romance. The way Joey cares about Chandler, Raj does the same. Howard and Chandler do not have any similar traits but both of them shared a bromance with Raj and Joey. Howard even stops Raj from marrying Anu as he wasn’t actually in love with her.

Sheldon and Monica cleaning an apartment together? That would be a hell of a scene to watch. While Monica is a neat freak, we all know that Sheldon is also a neat freak. Even I would dare go say that Sheldon cares even more about organizing and cleaning stuff than Monica. They would have been best buddies if these two shows had crossed over.

Chandler is the sarcasm king, and there’s no lying in that. Even fans say that he is the character who defined sarcasm. Chandler always cracks jokes and adds sarcastic comments. It seems like Howard from TBBT is kind of a reflection of Chandler. Though their personalities are entirely different, they both are the joke and sarcasm king in their shows.

Who doesn’t remember Central Perk’s orange couch from FRIENDS? And also how can you forget the couch with Sheldon’s spot? This was another similar thing between these two shows. Both the shows begin with this couch and end with it. I have a feeling that the shows are like the same person in different timelines, quite like Loki and Silvie lol.

If there had been an award for being the meanest mother on the planet, Beverley would have won that award. I mean who treats her own son as an experiment for the whole of his life? And also Monica’s mother isn’t any less mean either. Why would she keep finding faults in Monica while we all know how good and strong Monica is. She even thought that Monica would never end up with someone and so spent all of the savings of her wedding on a beach house. We can go on and on about mean things these two women did to their children. But let’s sum up that they played the role of mean mothers in both series.

“Smelly cat, smelly cat, what are they feeding you?” You probably sang it in the iconic Phoebe Buffay voice right? Yeah, I did the same. Okay, let me give another cat song to you, this one is a bit more soothing, “Soft Kitty, warm kitty, little ball of fur. Happy kitty sleepy kitty, pur, pur pur.” Sheldon’s favorite song is only to be sung when somebody is sick. Both shows gave us iconic cat songs.

Though the two shows shared many similarities including plots, characters, etc, both the shows were entirely different. Both of them have millions of viewers and fans. They’re among the most popular sitcoms.

FRIENDS Terminologies Quiz: Remember All These Elements From The Show?

FRIENDS Quiz: Can You Tell 15 Reasons Why These FRIENDS Characters...