25 Unseen Young Photos Of The FRIENDS Cast From The 90s

The internationally-known sitcom FRIENDS is comprised of a cast that has its name written in golden letters. Although over two decades have passed, FRIENDS still has a cult-like following. Since its premiere date, the cast Jennifer Aniston, Matt LeBlanc, Courteney Cox, Lisa Kudrow, Matthew Perry, and David Schwimmer have become household names. People from every generation are falling in love with this iconic sitcom. The credit for its huge success also goes to the hand of streaming services as well since they made it really available for the fans to watch anytime.

The show came in during a time that is often looked upon with nostalgia. It was filmed throughout the ’90s just like the show’s timeline. It was a simpler time back then where social media was not even a thought yet. Perhaps that is one of the reasons why people were so much into this sitcom. Life was modern but simpler at the same time. While watching the show today, it gives us nostalgia that we would love and want to experience. 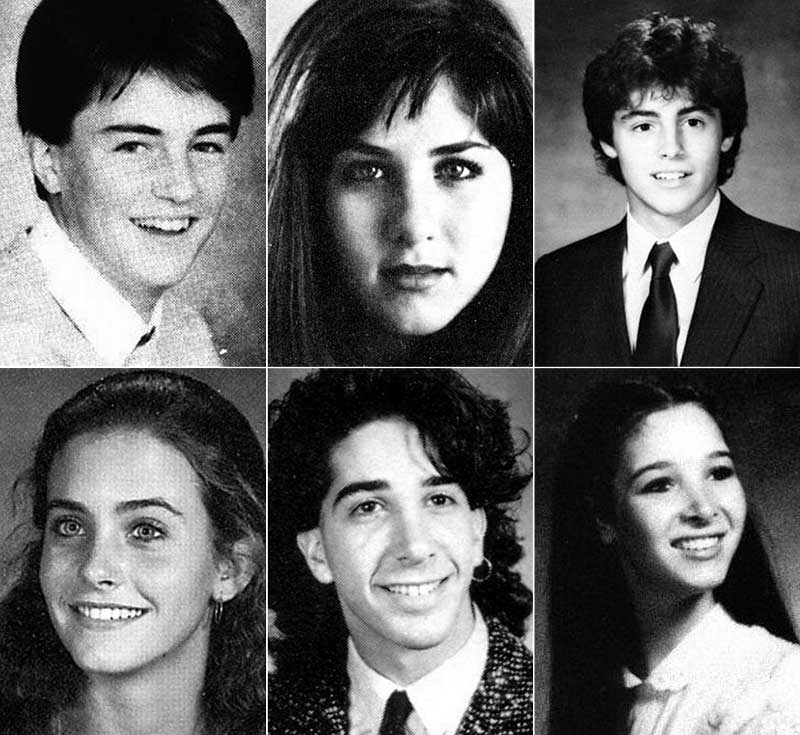 People are feeling nostalgic again after the FRIENDS reunion special that happened on May 27, 2021. Viewers are keen to know more about the good old days of the cast, after watching the entire cast coming back together in front of the iconic fountain and Central Perk’s orange couch. Many are digging the internet to get to know the cast even better. There was a time when this amazing cast was young and adorable, and you would love to see the pictures from those days of the 90s.

So, we are here to feed the fan in you with some nostalgic pics of the young cast. We have gathered some unseen and rare young photos from the 90s that will give you the needed vibe. Could this BE any more exciting?

4) Don’t You Think Lisa Kudrow And The Boys Are Looking Unbearably Adorable In This Picture?

6) The Brother-Sister Bond Of The Gellers Can Never Get Old. And This One Suggests Us Something Like The Routine!

7) The Justification Of How Much David Schwimmer Was Into Jennifer Aniston. They Always Seem To Had Feelings For Each Other.

8) When The FRIENDS Cast Decided To Take A Nap Together In Between Their Scenes. Probably A Staged Candid.

9) When Chrissie Hynde Performed In Season Two Of The Show. A Pic Was Mandatory!

10) When Morgan Fairchild Appeared On The Show As Chandler’s Mother. Probably This Is The Only Pic Where They Look The Closest.

12) When Julia Roberts Guest Starred In The Show As “Susie Underpants”. They Look So Beautiful Together. Look wise, Do They Look Better Than Mondler?

13) Matt LeBlanc And Lisa Kudrow Give Us The Vibes Of Real-Life Friends. Oh Wait, They Already Are Friends In Real Life Too.

14) When Ben Stiller Guest Starred In The Show As Rachel’s Boyfriend, “Screamer”. He Surely Was The Worst Boyfriend Rachel Ever Dated!

15) When Billy Crystal and Robin Williams Stopped By In The Show With The Iconic Scene On The Coffee Couch. The Episode Was Dangerously Funny!

16) They Actually Were Real-Life Friends With All The Fun And Support. In Between Scenes If Anyone Did Any Mistake, They Never Backed Out From Making Fun Of Each Other, But With All The Support.

17) When Charlton Heston Guest Starred In The Episode “The One with Joey’s Dirty Day”. His Advice To Joey Was Hilarious!

18) Mattew Perry While Exploring The London City When They Went To Shoot For Ross’s Wedding. Chandler Looks So Adorable.

20) David Schwimmer Made The Directorial Debut With The Episode “The One On The Last Night” In Season Six. If You Didn’t Know He Directed A Couple Of Episodes In FRIENDS.

21) When Elle MacPherson Joined The Cast As Joey’s Roommate, Janine

24) The Cast And Their Photoshoot At The Car JunkYard Looks Amazing. But It’s Difficult To Figure Out Why They Did This.

25) When Jennifer Aniston’s Then-Husband, Brad Pitt Made An Appearance As Will Colbert. Did You Enjoy This Episode?

FRIENDS ran from 1994 to 2004 for 10 seasons on NBC. HBO Max premiered a reunion special titled “FRIENDS: The Reunion” on May 27, 2021. The reunion included the original cast: Courteney Cox, Matthew Perry, Jennifer Aniston, David Schwimmer, Lisa Kudrow, And Matt LeBlanc. And that’s not it, there were creators of the show Marta Kauffman, Kevin Bright, and David Crane with lots of guest stars. Aniston and Schwimmer revealed at the reunion that she and Schwimmer had a crush on each other at the start of the show, who played the epic love interests Rachel Green and Ross Geller.

Throughout its 10 year reign on network television, FRIENDS was one of the most popular and culturally relevant sitcoms. Thanks to Netflix (and nostalgia) it’s still going strong. Despite so many years, we still love FRIENDS, their characters, and everything about it. We always want to know more and more about them. These pictures from the 90s would have surely taken you back to the time where they made it feel like “The real world sucks, You are gonna love it.”